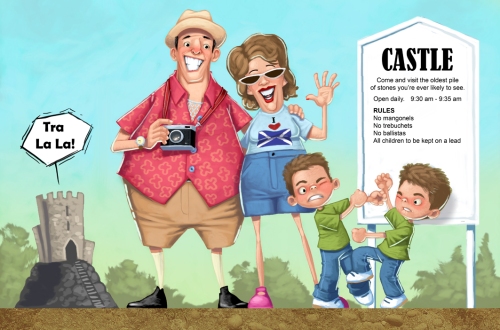 Being a children’s book illustrator means I spend most of my professional life in a tiny darkened room.
I doubt this is the norm.
Most other illustrators I know work in light, airy spaces but I prefer the gloom because I produce all of my work digitally. The days when I used to paint with a paintbrush are long gone; the PC and the Wacom are Kings in my house.

I think my desire for darkness is a throwback to my time as a graphic designer in the computer games industry. Lots of light equals lots of reflections you see, and reflections bouncing off a monitor screen are really annoying. They distort colour and make it difficult to see just what you’re doing. As far as I’m concerned, the only light you see should be the light coming from the screen itself. (that might seem a bit extreme, but it’s how I like to work)
I’ve even got to the stage where, if I need to do any sketching with a real pencil and paper, I’ll huddle closer to my monitor and work in the light it casts on my desk.

You’d think that by now my skin would be translucent and my eyes would be the size of dinner plates, but not so because apart from being an illustrator I also work a few days each week for Historic Scotland.
I work for Historic Scotland in a castle. A big, old, stony, battle-scarred, drowning in its own history, castle…which as you’d expect happens to be outdoors…in the sunlight*

As jobs go, working in a castle is a pretty good one, (not many people can claim to work in an office that was once besieged by Robert the Bruce.) but one of the most rewarding things about it is the interaction I have with the public.

Now I’m well aware that interacting with “Joe public” is some people’s idea of hell, but every year we get 30,000 visitors passing through the gatehouse, and up to now they have proved to be a more varied selection of humanity than I’ve ever met.

In the past few months I’ve met people from all over the world, some of them speaking in languages I’ve never heard spoken before. I’ve met scientists, writers, geologists and artists. I’ve met people who have travelled half way across the world to see the castle because in the dim and distant past it was their ancestral home. I’ve met South Korean choral singers who, unannounced and unexpected, began singing beautifully from the battlements. They weren’t singing for anyone in particular, there were hardly any visitors at the site. They just sang for the joy of it and it was fantastic.

Best of all though, for me at least, were the group of people I met a few weeks ago; Americans, five or six men and a single woman. All of them were exploring the site except for one guy in aviator shades who just “hung around”, so I began talking to him.
He explained that they’d come over from Houston, Texas, the day before and were just enjoying a day trip up from Glasgow (we’re about three hours away from there). I asked him how long they were on vacation in Scotland for.
” Just until tomorrow,” said the man, “and then we’re flying to Kazakhstan”.
“Oh, right” said I, a little puzzled.
“Yeah, then we leave there after a day, have another stop over in Glasgow, and then it’s back home to Texas.”

A four day vacation that includes two nights in Kazakhstan and two nights in Glasgow is peculiar by anyone’s standards, so I asked quite innocently what on earth he was going there for.
“To pick up some astronauts” he replied matter-of-factly, “some guys from the space station”.

It turned out that the party of Americans were employees of NASA. They were going to Kazakhstan because some American astronauts were due to leave earth orbit the following day and were going to land in Russia.
When he said that they were “…flying to Kazakhstan” he actually meant he would be doing the flying, because he was a NASA research Pilot and they had brought their own jet over from the States.
I guess that explains the shades and the fact he seemed a little tired; he was jet lagged in the truest sense of the phrase.

I don’t know about you, but I’m a bit of a science geek and that sort of thing turns me into a gibbering fool.
His colleagues then joined us, and I was surrounded by people who play an active part in the American Space Agency!
I began firing questions at them, asked them their opinions about the drastic cuts in Government funding that NASA is experiencing, told them how fantastic it was to meet them all, what an “honour” it was.
One of them, whose name I didn’t catch, patted his jacket pockets and said that he would have given me a NASA pen but didn’t have one on him.
Then, it suddenly struck me that these guys mightn’t be from NASA at all. They could just be playing an elaborate trick on some gullible English guy. I mean, it did seem a pretty far-fetched story.
Then, the guy in the shades pulled out his wallet, opened it and handed me this: 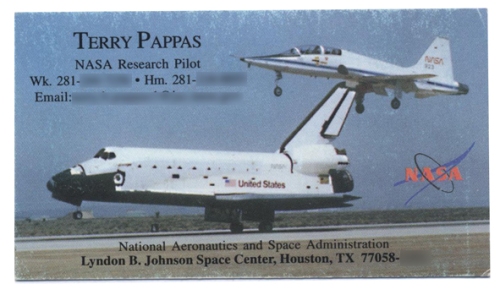 If I was any more of a Geek I would frame this!

His name is Terry Pappas, and he is the nearest thing to a spaceman that I will ever meet in my life.

So,  if you too ever feel the need to get out and experience a regular stream of astounding people doing amazing things that might just change the planet, all from the comfort of your own back yard, keep scanning the employment section.
You might find a job in a castle.

*sunlight = rain, actually. This is Scotland

2 responses to “An Englishman’s home…”